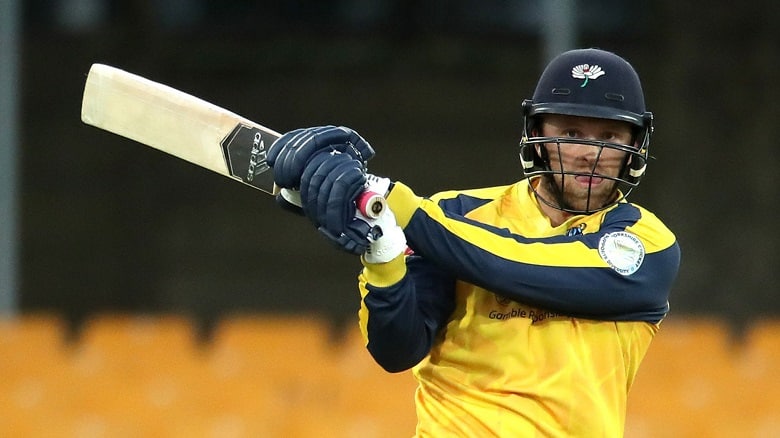 Both Warwickshire and Yorkshire will start their Vitality Blast campaign for the 2021 season as they lock horns in their first match in Headingley on Thursday.

Warwickshire, also known as the Birmingham Bears, missed out on qualifying for the knockouts narrowly last season. They finished third in their Central Group having won an equal number of matches as the second placed Northants, but an inferior net run rate meant the Northants qualified ahead of them. They have high hopes this season, though. The Bears have already done quite well in the County Championship and will be looking to carry that form forward into the white-ball format.

The Bears do not have any big local names in their squad but they have acquired the services of the Caribbean all-rounder Carlos Brathwaite. Young batsman Sam Hain will be looking to carry his good form from last season into this year. Captain Will Rhodes will also be looking to lead from the front.

The bowling attack doesn’t have that many big names either but young leg-spinner Jake Lintott remains a player to watch out for. Left-arm spinner Danny Briggs will also be looking to use all his experience to add some edge to the Bears’ spin attack. Veteran pacer Tim Bresnan will lead their pace attack.

As far as things for Yorkshire Vikings go, they will be eager to do better than their fifth place finish in the group stage last season. They certainly have the ability to do so and will be eager to notch up as many wins as possible in the first five games as they will have the services of England internationals Jonny Bairstow, Adil Rashid and Dawid Malan until then.

Skipper Dawid Willey adds a lot of balance to both their batting and bowling departments. The addition of kiwi pacer Lockie Ferguson is a huge boost to their pace attack as well. With these big guns on their side, Yorkshire certainly look like the stronger side on paper. But don’t rule out the Bears just yet, as they know how to make optimum use of their resources.

Rob Yates (ill) and Henry Brookes (thigh) both miss out. Chris Woakes is still working his way back and bowled for the first time yesterday.

He is an explosive top-order batsman. Lyth amassed 308 runs in eight Blast matches last season, at an average of 38.50 and at an outstanding strike-rate of 157.94.

He was the highest run-getter for the Bears last season with a total of 284 runs to his name, at an excellent average of 56.80. That included three fifties as well.

He didn’t have the best outings last season but Pollock is a very talented young batsman who has a huge potential. He has 724 runs to his name in the Blast, scored at a strike-rate close to 170.

Ferguson had a Vitality Blast stint in 2018 and he went on to pick up 16 wickets in 13 matches and that too at an outstanding economy rate of 6.65.

He also had his last Vitality Blast stint back in 2018. Overall, he has played 95 matches in this tournament and has picked up 106 wickets in them at an economy rate of 7.53.

The Yorkshire skipper is a new-ball weapon. He has 114 Blast wickets to his name at an average of 22.7. Willey is a potent batsman as well with over 2000 runs to his name in the history of the competition.

Brathwaite will strengthen both of Warwickshire’s batting and bowling departments. He has 171 wickets and over 1500 runs to his name in 193 matches.