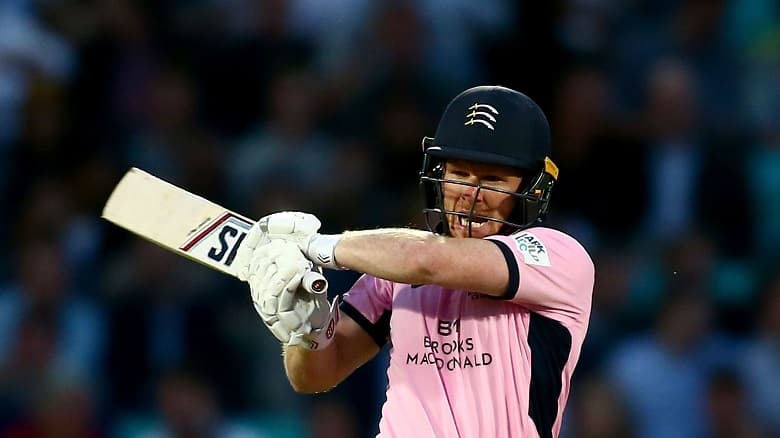 Last season’s finalist Surrey will take on rivals Middlesex in the famous London derby at Lord’s on Thursday, in their South Group encounter.

Surrey enjoyed an almost perfect season last year until their memorable run was halted by the defeat to the Nottinghamshire Outlaws in the finals. They finished right at the top of the South Group and came up with dominating performances in the quarterfinals and semifinals as well. But an off-day in the finals denied them the title they deserved.

They will look to make amends this time, though. The likes of Jason Roy, Sam Curran and Tom Curran are available for the initial few matches. Veteran South African batsman Hashim Amla brings a wealth of experience to the side as well. The batting unit consists of other talented batsmen in Will Jacks and Laurie Evans as well. As far as the bowling unit goes, it will be led by skipper Gareth Batty. He will look to tie down the batters with his disciplined spin bowling. The Curran brothers make an excellent seam bowling pair as well, whereas the likes of Reece Topley and Jordan Clark offer good support.

As far as things for Middlesex go, they will look to do better than their group stage exit after finishing fourth in the South Group last season. They have been boosted by the availability of England skipper Eoin Morgan for the first six games. Ireland international Paul Stirling adds firepower to the top of the order along with Stephen Eskinazi, the second highest run-getter last season. Australian spin-bowling all-rounder adds some much needed depth to both batting and bowling departments as well.

🗣️ | CHRIS GREEN AHEAD OF MIDDLESEX T20 DEBUT
We spoke to our overseas player @chrisgreen_93 ahead of his Middlesex T20 debut tomorrow @HomeOfCricket in the @VitalityBlast London Derby #OneMiddlesex pic.twitter.com/F72IuCvuPm

The batting unit looks quite strong due to the presence of Max Holden and Nick Gubbins alongside Stirling, Morgan and Eskinazi. Joe Cracknell and John Simpson add some much needed firepower to the middle and lower-order as well. As far as the bowling goes, the spin-bowling unit is strong in particular. Along with Green, Nathan Sowter and Luke Hollman offer some much needed edge in the department. Holden and Gubbins are capable of bowling some part-time overs of spin as well. The pace attack looks a bit weak, though, as most players are out with injuries. Steven Finn will lead the pace attack along with rookies Ethan Bamber and Blake Cullen. Middlesex will be hoping that the young pacers can step up to give Finn the support he needs.

Tomorrow will see a 15-man squad make the short trip north of the river to face Middlesex as we get our @VitalityBlast campaign underway. pic.twitter.com/47q06t7eVg

The top-order batsman from Middlesex enjoyed an excellent campaign last season. He finished as the second highest run-getter in the tournament with 413 runs to his name, at an average of 41.30. It included four fifties and his runs came at a strike-rate close to 150.

The England skipper last featured in the Vitality Blast in 2019. He amassed 341 runs in nine innings that season, at an outstanding average and strike-rate of 42.63 and 168.81 respectively.

He will be available for the first six Group stage matches for Surrey. Roy played in five matches last season and scored 206 runs at an average of 41.20. Surrey will be hoping for equally good returns from him this time.

The veteran South African batsman is back for another stint. Amla played eight matches last season and amassed 271 runs at an average of 38.71.

The Australian spinner had a brief stint during the 2019 Blast season and picked up five wickets in six matches, at an excellent economy rate of 6.69. Green will be eager to come up with an equally good performance this time.

He didn’t play last season but he has been seen in excellent all-round form in the IPL and for England. As far as his Blast record goes, he has 38 wickets to his name in 46 matches. He has scored over 500 runs at an average nearing 18 as well.

Like his brother Sam, Tom Curran didn’t feature in the last Blast season as well. However, his overall record in the tournament speaks volumes about his wicket-taking ability. Tom has 72 wickets to his name in 61 Blast matches, at a strike-rate of 17.30.