Royal Challengers Bangalore will take on Kolkata Knight Riders in the Eliminator match of IPL 2021 on Monday at Sharjah Cricket Stadium. The two teams have taken on each other twice this season. Both have managed to win one match apiece.

For the second consecutive occasion, RCB have made it to the qualifiers. SRH beat them in the Eliminator last year. This time around, they will be playing against KKR and would hope that they beat them and reach the finals.

Talking about their batting, RCB will largely be banking on Glenn Maxwell, who has been in prolific form with the bat. He has hit 6 half-centuries this season and has played an integral role in helping the team finish in the top four. Maxwell will be the biggest bet for them for sure.

After finishing the league stages on a high, our focus will be on the all-important knockout game tomorrow in Sharjah. Here’s everything you need to know about #RCBvKKR. #PlayBold #WeAreChallengers #IPL2021 #PlayOffs pic.twitter.com/awFvfHmy63

Having said that, the likes of Virat Kohli, Devdutt Padikkal and AB de Villiers too need to step up. The trio isn’t in the best of form but this is a big concern for them.

As for the bowling, Harshal Patel will be the man to watch out for. He has picked wickets for fun this season. His slower ball has been his biggest weapon. He has taken 30 wickets this season and the team would be hoping he takes a few more on Monday. Yuzvendra Chahal has shown great improvement in the second leg of the tournament, while Siraj too made great returns in the last game, picking 2 for 25 in 4 overs. RCB needs to produce a collective effort from both bat and ball if they fancy a chance against a high-flying KKR.

Kolkata Knight Riders would be riding high on confidence, given how they have played in the second leg of the tournament. The addition of Venkatesh Iyer and Lockie Ferguson has proved to be a masterstroke. Iyer and Gill have provided solid starts at the top, while Nitish Rana and Rahul Tripathi have capitalized on that wonderfully.

As for the bowling, Lockie Ferguson has been consistently amongst the wickets. He will share the fast bowling duties with Shivam Mavi, who picked four wickets in the last game. Sunil Narine and Varun Chakravarthy will be the main bets in the spin department. Chakravarthy is KKR’s leading wicket-taker for the second consecutive occasion. He has picked 16 wickets in 14 matches thus far. It will be interesting to see how RCB play his four overs.

Also read: CSK beat DC by 4 wickets to confirm their place in the finals

Royal Challengers Bangalore would be banking on Glenn Maxwell in a must-win clash on Monday. He has been their savour this season, having managed to hit as many as 7 half-centuries. In 14 games, Maxwell has scored 498 runs at an average of 45.27.

Harshal Patel to pick the most wickets for RCB in the match: 9/4 @betway

Harshal has been enjoying a dream run in IPL. He has taken as many as 30 wickets this season in just 14 matches with a strike rate of 10.47. He has picked 4 wickets in his last two games.

Shubman Gill has shown great intent in the second leg of the IPL. He has batted with some authority and is coming into the game on the back of two consecutive half-centuries. The team would be hoping that he hit his third half-century in a row on Monday.

Lockie Ferguson to pick the most wickets for KKR in the match: 13/5 @betway

Lockie Ferguson has bowled great lengths and mixed up really well in the second leg of IPL 2021. In the absence of Pat Cummins, he has bowled exceptionally well for the side.

After missing out a couple of games due to injury, Ferguson made his comeback in the last game and finished his spell with the figures of 3 for 18 in 4 overs. 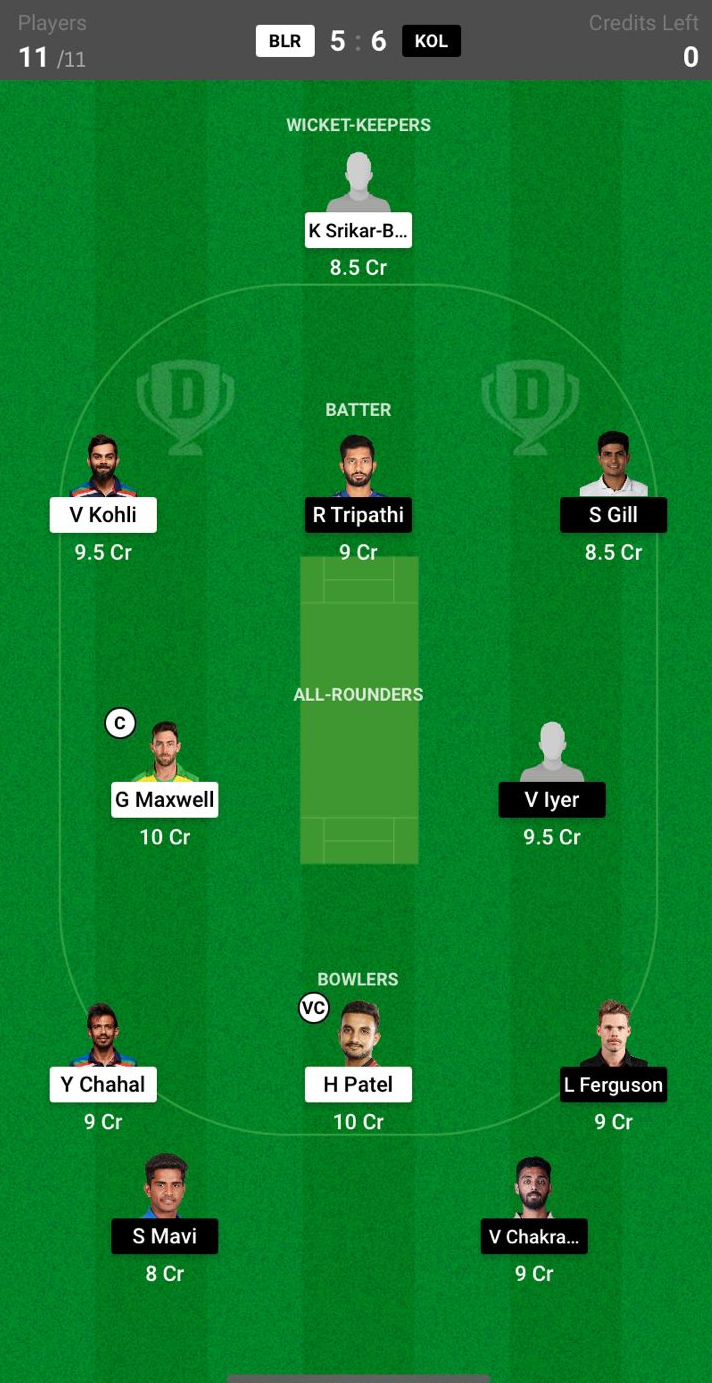 Glenn Maxwell has enjoyed a wonderful season with the bat. Also, he can fetch you points with the ball as well, and thus, is the safest bet as your captain for your fantasy team.

With more than 1000 fantasy points to his name, Harshal Patel is an ideal candidate for vice-captaincy. He has consistently picked wickets for the side. His four overs are going to be extremely crucial for RCB in the must-win encounter.