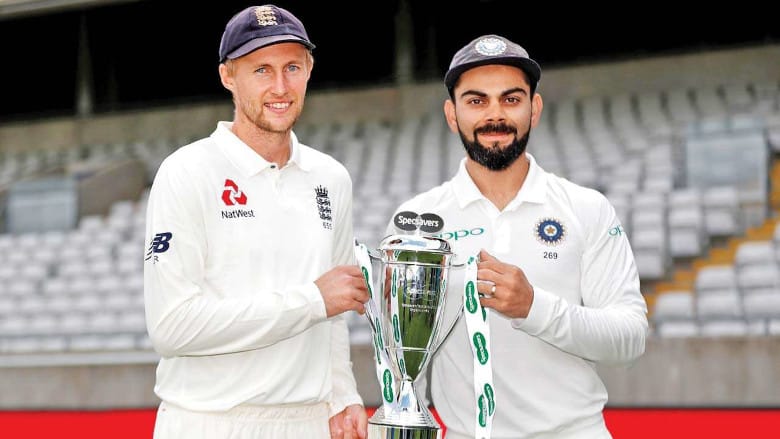 India are on a high after an incredible triumph against the odds in Australia, and will be strengthened by the return of their captain and leading batsman Virat Kohli, who takes the reigns from Ajinkya Rahane.

The bowling attack of India is depleted following a spate of injuries, but there will be chances aplenty to impress as India go into the series having not lost at home since England’s tour in 2012-13.

Their batsmen will fancy themselves at scoring big runs against an inexperienced spin attack of Dom Bess and Jack Leach – though Moeen Ali could add some know-how – and that battle could dictate the fortunes of both sides over the four Test matches.

As ever, England will be looking to Joe Root and Ben Stokes to score the bulk of their runs but Ollie Pope could establish himself as a breakout global star – along with Shubman Gill – and both will be players to watch out for, while Jofra Archer’s IPL experiences will mean he goes into the series high on confidence.

Virat Kohli – With three centuries in nine Tests against England in India – including 655 runs in 2016/17 at 109.16 – Kohli is the obvious threat to the touring bowlers. He is without an international century in more than a year and after missing the win over Australia, will be desperate to prove his importance. 3/1

Joe Root – The England skipper is in prime form as he enters his 100th Test and is renowned as one of the best players of spin in the world. Scores of 228 and 186 against Sri Lanka was a statement of intent for Root, who averages over 50 in India with one century to his name. 4/1

Cheteshwar Pujara – A wall at number three for India in Australia, Pujara is a much bigger run-scoring threat at home and has over 800 runs in nine Tests against England, with one double hundred. Given his appetite for big runs and England’s spin attack, he could be a good bet. 5/1

Rohit Sharma – Sharma is a relative newcomer to the opening spot in Test cricket, and England will fancy their chances of nicking him off early through either Stuart Broad or James Anderson. If the pitches seam as they are thought to, he might have difficulty making it past the new ball. 7/1

Ben Stokes – The world’s premier all-rounder makes his return after missing the tour to Sri Lanka, but that lack of cricket could cost him in the early Tests as he gets up to speed. He is a much-improved player of spin and has had success in the IPL, but averages just 27 against India in Tests with one century on the sub-continent. 9/1

Ravi Ashwin – With over 250 wickets in home conditions at 22.80, Ashwin is a threat to any team on the sub-continent. England are a side without many left-handers in the top order which could nullify his threat to some extent, but he will enjoy long bowls and has plenty of variation to keep the tourists guessing. 6/4

Dom Bess – Bess is still something of an unknown in international cricket. With 12 wickets in Sri Lanka he undoubtedly had a good series, but inconsistencies in line and length have raised questions over his ability to tie down the best players of spin at this stage in his career. Despite that, his personality and competitive spirit means that he is always capable of picking up wickets, but he could face a tough time in India. 7/2

Jack Leach – A player with a bit more experience than Bess but having had a torturous time in 2020. He has a good record in Asia having toured Sri Lanka twice, but was some way short of his best in the recent series. His left arm variation will be crucial for England however. 4/1

Moeen Ali – Moeen hasn’t played a Test for 18 months and following a bout of COVID-19 he appears to be at the back of the queue to start this series, but his previous experience of India will appeal to England. Despite that, he took just 10 wickets on his previous tour at more than 60 apiece. 9/2

Kuldeep Yadav – Whether Kuldeep plays will depend on the balance of the side India adopt, but his case is made stronger by the absence of Ravi Jadeja. England appear to have his number in one-day cricket, so he faces a challenge if he wants to be among the top wicket-takers here. 5/1

Elsewhere, there will be a lot of eyes on Jasprit Bumrah’s first home series as a Test bowler and odds of 10/1 could be tempting, while Jofra Archer at 14/1 also represents decent value for a man who will be firing on all cylinders.

Everything you need to know about the various betting markets is right here.