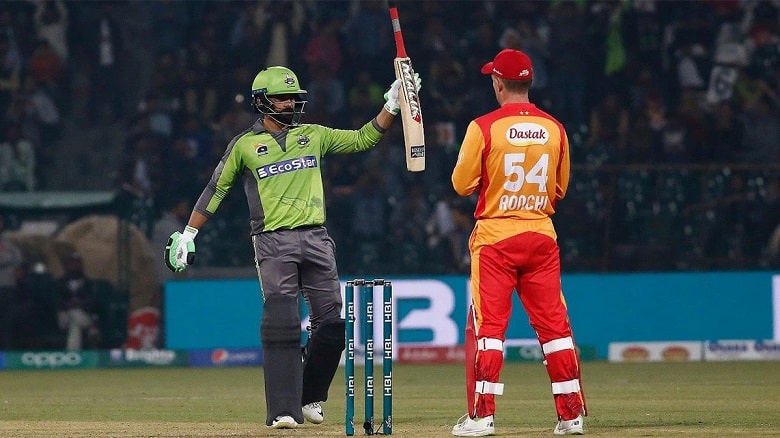 The Peshawar Zalmi will play their first game of the second phase of PSL 6 against Lahore Qalandars on Thursday. Wahab Riaz and Co. started their campaign against the same team and Lahore Qalandars won that game by 4 wickets.

However, they went onto win the next three games before losing to Karachi Kings. Currently sitting at number 2 on the points table, Peshawar Zalmi knows how important the next few games are going to be for them.

A few important members haven’t made it for the second leg, while some new players make their way into the side. Despite their experienced lads namely Shoaib Malik and Kamran Akmal failing to score big runs, the Zalmis have managed to score mammoth totals on quite a few occasions. One could fathom how much depth they have in their batting unit.

The likes of Imam Ul-Haq, Kamran Akmal and Shoaib Malik would be keen to get back to their prime touch. Rising block, Haider would be the guy to watch out for. Batting in the middle order, Ali has managed to do what he has been asked for. In 5 games, he has scored 119 runs, including a half-century.

The weakness, however, lies in the bowling department and the Peshawar Zalmi would be aware of that. Their leading wicket-keeper, Saqib Mahmood is no longer available for them. Wahab Riaz’s quota of four overs is going to be extremely important. Besides, to add strength to the bowling department, they have made notable inclusions in Fidel Edwards and Fabien Allen. On the slow and sluggish surface of Sheikh Zayed Stadium, the bowlers ought to come good against a solid batting lineup of Lahore.

Are you not entertained?

A glorious return to #HBLPSL6 with a match that went down to the last ball! @lahoreqalandars took the win after an exciting second innings!

On the other hand, Lahore Qalandar began their second leg campaign with a last-ball win against Islamabad United on Wednesday. Rashid Khan and Ben Dunk held their nerves to win a match that looked like going out of their hands until the 18th overs.

James Faulkner starred with the bowl for Lahore. He put the United on the backfoot after picking three quick wickets inside the first six overs. On a slow and sluggish wicket, they restricted Islamabad to 143 in the first innings. Ahmed Daniyal and Haris Rauf picking wickets in the middle overs didn’t allow the opposition to develop a partnership as none of the batsmen could reach past the 30-run mark.

Islamabad fought back brilliantly in the second innings and take the early breakthroughs. However, Sohail Akhtar’s 40 off 30 balls and vital cameos from Hafeez, Rashid Khan and Ben Dunk helped Lahore romp home on the final ball of the match. Needing 16 in the final over, Rashid Khan struck three consecutive fours to turn the tables for the side. With this win, the Qalandar have strengthened their position on the points table with 5 wins 6 games.

In pursuit of a 143-run target, the skipper didn’t allow the opposition to take control. He started the innings strongly and went onto score 40 runs off 30 balls, including 5 fours and 1 six. Expect him to score another vital knock on Friday.

A good player of spin, Mohammad Hafeez is expected to shine on a slow and sluggish wicket of Sheikh Zayed Stadium. He played a vital cameo of 29 off 25 balls in the last game against Islamabad United.

The premier batsman in Peshawar Zalmi’s squad, Shoaib Malik will have a huge role to play in the second leg. Also, the pitch in Abu Dhabi is likely to bring the best out of him. So far, he has managed to score 101 in the first leg at a strike rate of 124.69.

The rising star of Pakistan Cricket, Haider Ali would be the guy to watch for. So far, he has managed to play decent cameos and it will be interesting to see how he fares in the remainder of the tournament. In 5 games he has scored 119 runs, including a half-century.

James Faulkner enjoyed a great outing in his first game for Lahore Qalandars against Islamabad. The left-arm seamer broke the back of the oppositions as he claimed three wickets inside the first six overs. He is likely to cause similar damage against Peshawar Zalmi. In his first game, he returned with figures of 3 for 32 in 4 overs.

One of the left modern-day left-arm seamers, Shaheen Afridi is a must-have pick for your fantasy time. He was a little expensive in the last game but would be keen to make a stronger comeback on Thursday. He is currently the second-highest wicket-taker in the league, picking 11 wickets in 6 games.

Rashid Khan would be the toughest bowler to face for Zalmis, especially on the Abu Dhabi pitch. He gave away just 9 runs in 4 overs in the last game and picked one wicket. He continues to be one of the most important players in the side.

Wahab Riaz will lead the pace-attack of Peshawar Zalmi. In the absence of Saqib Mahmood, his role in the team becomes extremely crucial. He has so far managed to pick 8 wickets in 4 games in the tournament.