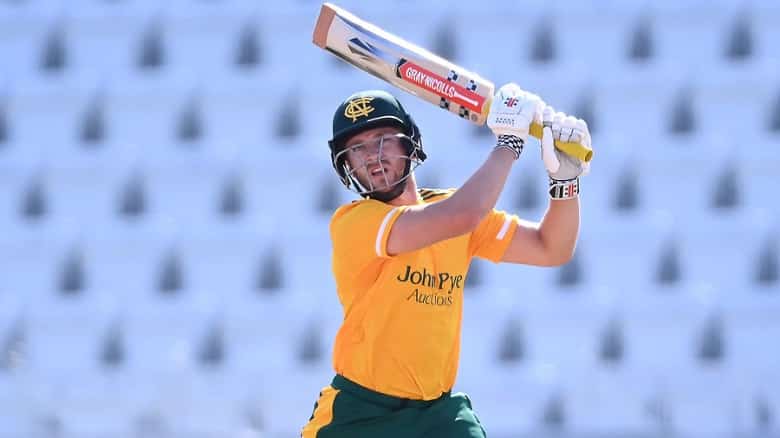 Defending Champions Nottinghamshire Outlaws will take on Warwickshire, also known as the Birmingham Bears, in their second match of the Vitality Blast 2021 season at Trent Bridge on Friday.

Nottinghamshire’s first match against Worcestershire Rapids turned out to be an interesting affair as the game ended in a tie. The bowlers did a fine job to restrict the Rapids’ batsmen to a score of 152/6. Openers Alex Hales and Joe Clarke got the Outlaws off to a flying start as well. They put on 76 for the first wicket inside six overs. However, they underwent a huge collapse once the two openers departed and all they could manage was to level the score off the final ball of the innings with two wickets in hand. They will look to address their middle-order mess in this match and show the world once again why they are the defending champions.

On the eve of the @VitalityBlast‘s return to Trent Bridge, there’s a certain someone more excited than most…#BeMoreOutlaw pic.twitter.com/TeIHi21g8k

Warwickshire, on the other hand, lost their season opener to Yorkshire by six wickets. There was a lack of substantial contributions from the batsmen apart from Sam Hain, who scored a fifty. All they could manage was a total of 144/8 in their 20 overs, which was chased down easily by Yorkshire with six wickets and nine balls to spare. Youngster Ed Pollock’s woeful batting form continued as he could manage only a run from the three deliveries he faced. Adam Hose and Dan Mousley looked good during their brief knocks of 22 but they will need to kick on. Skipper Will Rhodes was dismissed for a duck and he will need to do much better this time.

Hales has been one of the best top-order batsmen in the T20 circuit for the last few years. He looked in good touch in the season opener as he made 31 runs off just 18 deliveries. He gets big scores consistently and that makes him a good bet for this match.

He is one of the best rising young batting talents in T20 cricket. Clarke showed that once again as he smashed 45 off just 21 deliveries in the Nottinghamshire’s season opener against Worcestershire. You can back him to get a big score in this match once again.

Hain promised a lot when he finished as Warwickshire’s highest run-getter last season and he has delivered on that promise once again as he started the season with a classy fifty. He showed how good form he is in and he will be hungry to get a big score in this match once again.

Hose looked quite good during his brief attacking knock of 22 in the last match. He couldn’t kick on and get a big score then, but he will definitely be eager to do that this time.

Fletcher showed his death bowling skills in the last match. Even though he was a bit expensive in his first spell, he came back and picked up two wickets at the death.

Carter showed how good he is with the new ball once again. He derailed Worcestershire’s innings quite early with the wickets of Moeen Ali and Brett D’Oliveira in the last match.

Brathwaite bowled good line and lengths in the previous match and picked up a wicket having conceded 30 runs in his four overs. He would want to keep doing the good work in this match as well.

The veteran spinner was Warwickshire’s best bowler in the previous match. He conceded only 28 runs in his four overs and also picked up two wickets. Briggs can be expected to lead their bowling attack in this match once again.

Nottinghamshire to win at 8/15.

Warwickshire to win at 7/5.