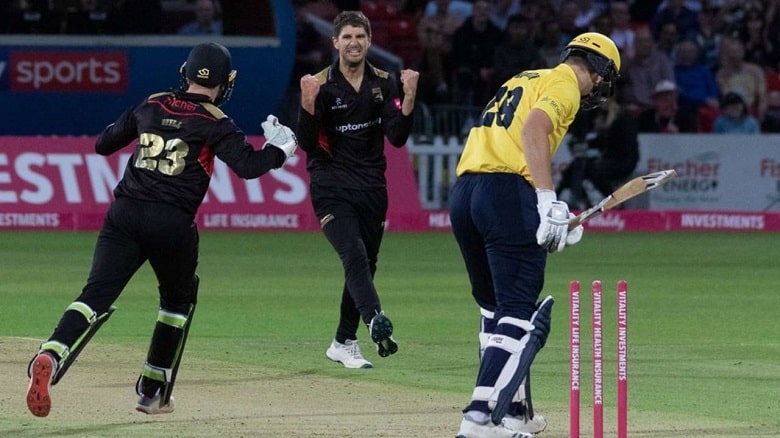 Leicestershire Foxes will take on Derbyshire Falcons in their second match of this Vitality Blast season at home on Friday.

Both teams tasted defeat in their opening encounters to Lancashire. While the Falcons lost their first match by six wickets, the Foxes fell short of the target set by Lancashire by 16 runs. There were some positives to take for both sides from those defeats, though.

Gavin Griffiths shone with his bowling for Leicestershire as he registered a superb spell of 4-1-24-4. Josh Inglis also looked good on his Blast debut as he smashed 34 off just 19 deliveries. Skipper Colin Ackermann could muster only 18 runs but he was pretty good with his bowling as he picked up two wickets at an economy rate of 5.50. Rishi Patel’s 17-ball cameo of 32 runs late in the innings would have given the Foxes immense confidence as well. Only opener Scott Steel’s innings looked a bit odd as he scored a fifty at an strike-rate of only 103.85. That turned out to be the difference between winning and losing for the Foxes eventually.

As far as things for Derbyshire go, Luis Reece’s all-round performance was really a morale-boosting one. Not only did he score a fifty at the top of the order but picked up two wickets at a good economy rate as well. Alex Hughes looked good with his 19-ball cameo of 28 down the order but there was hardly anything else to celebrate for the Falcons. Most of the other batsmen looked rusty and the bowlers were way off their mark as well. So, they need to improve in these areas if they want to register a win in this match.

The Australian wicketkeeper-batsman showed what he is capable of with his 19-ball innings of 34 in the first match against Lancashire. He looked in good touch and will like to carry that form forward into this game.

The Leicestershire skipper scored only 18 runs in the last match but he picked up two wickets with his bowling. He is quite a reliable batsman, though. So, we can expect him to deliver with the bat this time.

The veteran batsman didn’t have a good outing in the last match but he is still their most experienced batsman and one of the best in the business. He could step up in this match.

He scored an attacking fifty opening the innings in the last match and went on to pick up a couple of wickets too. Reece is a very good bet for this match as well.

He bowled an exceptional spell of 4-1-24-4 in the last match against Lancashire. Griffiths bowled good lines and generated good movement with the ball as well.

The Afghan bowler turned out to be quite expensive in the previous match but he did pick up a wicket. We can expect him to do much better in this game.

The Dutch bowler didn’t have a good outing in the last match but he is pretty experienced and should be able to make a good comeback here.

He couldn’t pick up a wicket in the last match but he was quite economical as he conceded only 29 runs in his four overs. Critchley can be expected to pick up his first wicket of the season tonight.

Leicestershire to win at 8/11.