Chennai Super Kings will play against Delhi Capitals in qualifier 1 at Dubai International Cricket Stadium on Sunday. The two teams are the most consistent outfits this season. It is important to know that in the last four encounters between these two sides, Delhi Capitals have managed to win all four of them.

Delhi Capitals stood at the top of the points table at the end of the league stage. They played 14 matches and won 10 out of them. Delhi Capitals have managed to beat almost every franchise this season, largely because of their openers and the bowling attack.

There is no denying that Delhi has, arguably, the best bowling unit. Avesh Khan has been the find for them this year. He is the second-highest wicket-taker this season and has consistently picked wickets for the franchise at all stages of the game. Anrich Nortje has been excellent in the second leg of the tournament. He has given runs less than 6 an over, besides picking crucial wickets in the powerplay as well death overs.

His ally, Kagiso Rabada has been a bit expensive this year but the South African will be a big bet for DC in a high-octane clash on Sunday. The left-arm spin of Axar Patel should bode well against the CSK’s batting line, which has a good number of right-handers in their team. Ravi Ashwin’s form seems the only concern, though.

He hasn’t taken a lot of wickets this season for the franchise. Shikhar Dhawan and Prithvi Shaw have done the bulk of the scoring for Delhi Capitals this year. The duo returned to form with a valuable partnership in the last game against RCB. The middle-order hasn’t shown the same level of consistency and that could be a headache for Delhi Capitals going into an important encounter.

Chennai Super Kings, on the other hand, are sitting at the second position on the points table. Had they not lost their last three matches, they could have been at the top of the table after the league stage. All three defeats might have ruined the momentum but CSK knows how to win the games in the playoffs. They have done it in the past many times and would be confident to do it one more time.

With the ball, they have the likes of Dwayne Bravo and Shardul Thakur to take them out from difficult situations. The duo has picked wickets consistently and has stepped every time the team has been in trouble. MS Dhoni would be hoping that Josh Hazlewood and Dwayne Bravo gave the side a good start with the ball.

Ruturaj Gaikwad and Faf du Plessis’ outstanding firm should give them the confidence of scoring a big total on the board. However, if they get out early, then things could turn ugly for them.

Ruturaj Gaikwad to be the highest run-scorer for CSK in the match: 7/2 @bet365

If the CSK openers manage to play the short ball well on Sunday, then one could expect another match-winning score from Ruturaj Gaikwad. He has been in brilliant form, having managed to score 533 runs in 14 matches at an average of 44.42

Shardul Thakur to pick the most wickets for CSK in the match: 11/4 @betway

The man with the golden arm, Shardul Thakur is expected to play a key role for CSK in the big game. He has provided breakthroughs whenever the match seems to go out of hand. Thakur has the most number of wickets for CSK this season, picking 18 wickets in 14 matches at an average of 25.17

If Delhi need to win this match, Shikhar Dhawan has to score runs at the top and anchor the innings. He has been in outstanding form and the team would be depending on him to score a big knock on Sunday.  In 14 matches, he has 544 runs at an average of 41.85.

Axar Patel to pick most wickets for Delhi Capitals in the match: 7/2 @betway

Given CSK’s batting unit has a lot of right-handed batsmen in the side, he could be a great bet for DC. Besides, Patel has been consistently amongst the wickets and his recent form inspire a lot of confidence. 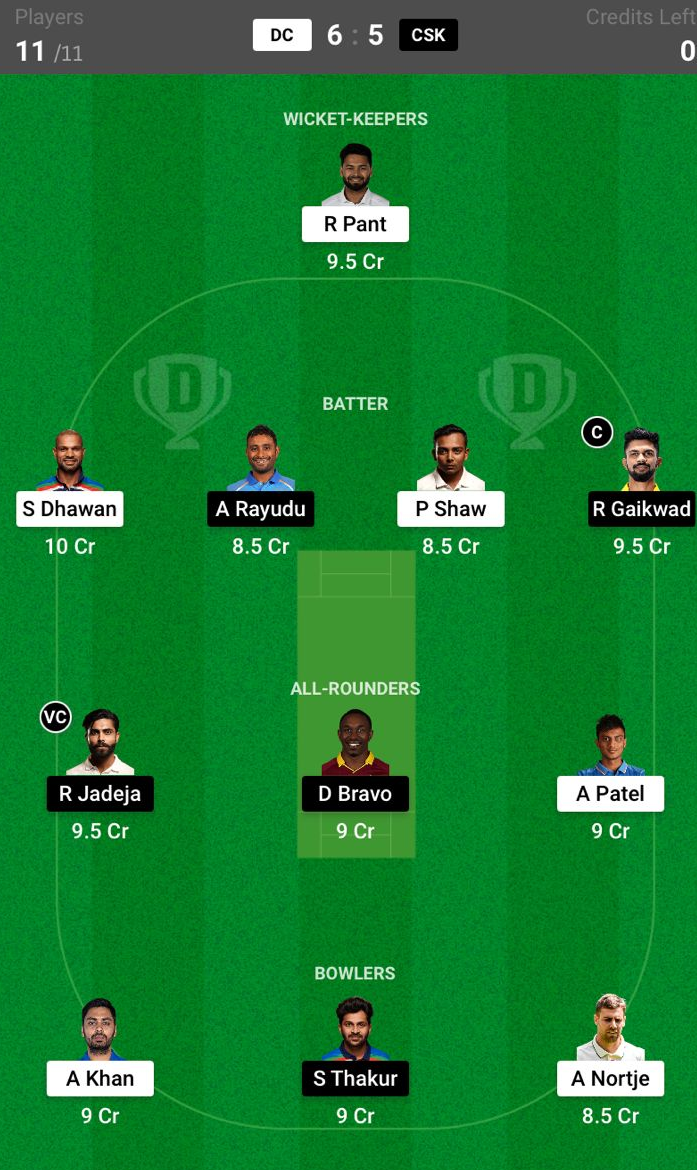 For captaincy, one could go with the likes of Shikhar Dhawa, Ruturaj Gaikwad or Faf du Plessis. All the players are in outstanding form and could be great picks to bet on.

As far as vice-captaincy is concerned, you could look for someone like Ravindra Jadeja. He will fetch you points in all three departments of the game. Jadeja has been in outstanding form with the bat and that could be the reason that he might come ahead of MS Dhoni on Sunday.